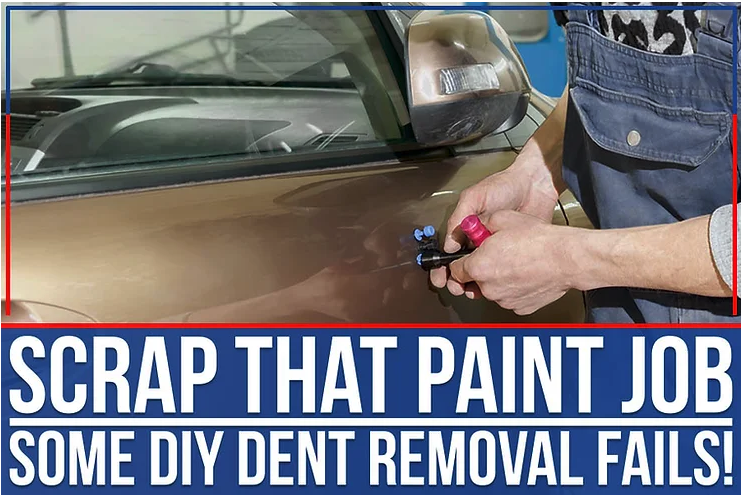 If you've ever tried to remove a dent from a car on your own, you know that it's not as easy. Most people make the situation worse by scraping or chipping the paint off of their car in the process. If you're thinking about trying to fix a dent on your own, be sure to read this post first!

What Happens When You Try DIY Dent Removal?

If your car has a few dents and you're feeling handy, you may be tempted to try your hand at dent removal. Unfortunately, this is one area where DIY can quickly turn into a disaster.

While a few methods may work on small dents, anything more than a minor ding is likely to result in an infinite loop of making the problem worse. If you're not careful, you could be stripping the paint, breaking the windows, or even causing the body to crumple.

So, before you break out the sandpaper and spray paint, consider whether it's worth the risk. In most cases, it's best to leave dent removal to the professionals.

Dent removal can be a tricky process. Here are some of the tools you'll need to remove dents:

1. A Dent Puller: This is a tool used to remove small dents from metal surfaces. It consists of a handle and a suction cup placed over the dent. The handle is then used to pull the dent out.

2. Pliers: Pair of pliers is essential for any dent removal project. Pliers can be used to pull out bigger dents or to grip and remove smaller dents.

3. A Hammer: A hammer can gently tap the edge of the dent, which can sometimes loosen it enough to be pulled out.

4. A Heat Gun: A heat gun can heat the metal around the dent, which can make the dent easier to remove.

If you’ve done this before, you should be able to remove that ding without scraping your paint job with a little patience and perseverance. However, you may end up creating a disaster for your car.

Dent damage is one of the most common problems that car owners face. Dents can be caused by various things, from hailstorms to falling tree limbs. Always parking in a garage is not possible or practical.

Fortunately, there are a few simple steps that you can take to help protect your car from dent damage.

Gosch Collision, serving Winchester, CA, wants your vehicle to be as good as new! That’s why we offer services like repairs on all makes and models, towing assistance, car dent removal service, paint service, and much more!

You can easily request an online appointment now!